We learned just a few days ago that the GSA (Government Services Administration, owner of the warehouse) has sent a proposal to the District of Columbia government to trade 49 L Street SE for streetscape improvements at St. Elizabeth's.

The proposal from GSA involves an exchange of GSA’s building and land at 49 L Street SE for construction services to be performed by the District of Columbia adjacent to St. Elizabeths campus on Martin Luther King Avenue SE.  The District plans to make various enhancements to the streetscape of Martin Luther King Avenue, including restriping of roads, constructing sidewalks and crosswalks, and expanding the roadway.  In return, the District would own 49 L Street SE in fee simple with full rights and ownership over the property.
“This exchange takes GSA further with work necessary to complete the DHS headquarters,” Norton said.  “In the process of moving a DHS priority, GSA has found a way to dispose of the long-underutilized 49 L Street SE by exchanging it for construction services from the District.”
This is an incredible development for the Capitol Riverfront / Navy Yard community and the city. This deal not only sets the possibility of bringing a community oriented amenity to Half Street SE, but brings a real solid chance of our community supported concept being adopted!
Now's our time to show the District the incredible value of this deal to bring something such as HSM to the city.  We'll keep you updated as more details arise and let you know how you can best show your support to District officials to encourage this deal to move forward.

Thank you for your continued support!

Additional coverage can be found in the Washington Business Journal as well as on JDLand.
Posted by Nathan Alberg at 1:22 PM No comments: 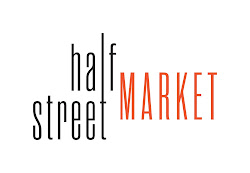 The Half Street Market is a re-use concept for an existing GSA property in Southeast, Washington, DC that will provide the neighborhood and city with a public venue for a food market, restaurant, and flexible community space.